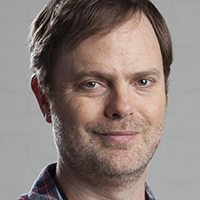 Full Name
Rainn Wilson
Job Title
Actor, The Office & Co-Founder
Company
SoulPancake
Speaker Bio
Rainn Wilson is an American actor, comedian, writer, director, businessman, and producer. He is best known for his role as Dwight Schrute on the NBC sitcom The Office, for which he has earned three consecutive Emmy Award nominations for Outstanding Supporting Actor in a Comedy Series.

A native of Seattle, Wilson began acting in college at the University of Washington, and later worked in theatre in New York City after graduating in 1986. Wilson was cast as Dwight Schrute in The Office in 2005, a role which he played until the show's conclusion in 2013. In addition to acting, Wilson published an autobiography, The Bassoon King, in November 2015, and also co-founded the digital media company SoulPancake in 2008.
Speaking At
My Life as an Actor and Entrepreneur & "Finding Your Why"
REGISTER NOW
BACK TO FULL LIST OF SPEAKERS